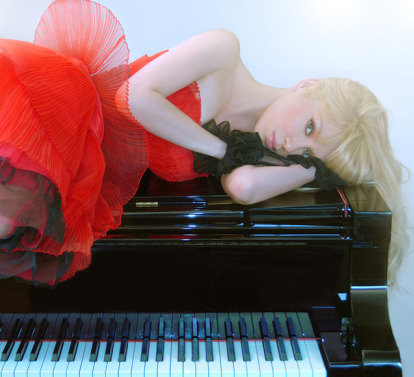 For Singer-Songwriter Sonya Kahn, the quote, "Where words fail music speaks" isn't just a quote, its part of who she is as an artist. A classically trained concert pianist - talent powerhouse utilizes her education and creative wizardry to share her ideas, thoughts and soul through her music. Growing up in Moscow, Russia, Sonya Kahn has lived life like someone who has been here three times as long. She started playing the piano by the age of three, singing by five and writing music by the age of six. Her family’s background in music is vast, with her mother an established concert pianist and university professor; her grandmother a singer/actress and radio performer; making three generations of musically gifted women an accomplishment in itself. So it came as no surprise that Sonya was introduced to the joys of classical music at an early age.

It’s been a long road from her first six-year touring gig in Europe at the age of six, with the group SUNSHINE. Back then Sonya was a multi-talented child prodigy touring, recording, performing as a lead vocalist, while being a full-time student at a prestigious European music academy. She was known as the little girl with the big voice. “I was just a kid,” she remembers. “But I loved the idea of being on stage and singing in front of thousands of people. It was my first taste of success.”

While continuing to further her education with occasional trips back to Europe she finally decided it was time for her to challenge America. Arriving in Los Angeles, she took it upon herself to learn a new language, English. She knew learning English was absolutely necessary if she was to write and sing for an American audience. Self-motivated, this determined music multi-hyphenate prevailed with her tenacious ambition and music expertise to do it herself without compromising her need to express herself.

This beautiful music maverick is a force to be reckoned with. Her dynamic professionalism, talent and individuality certainly put her head and shoulders above the rest.

SONYA KAHN has announced the release of her second album, “Stripped Ballads.”  The album is available now on iTunes, Amazon MP3, Rhapsody, Napster and in major retail stores.

A concert pianist who has played the piano since the age of three, SONYA KAHN tells that this album marks a more intimate departure from the complex arrangements and productions of her previous album, “New Beginning.” “Stripped Ballads” is exactly that: a naked approach to big songs.

Sonya chose to record “Stripped Ballads” acoustically, on a grand piano. Though Sonya’s piano arrangements evoke all the nuance of a full symphony orchestra, stripping down the songs in this way resulted in a bare simplicity, allowing the craftsmanship of the songs – as well as Sonya’s huge vocal range – to shine through. The result is an honest sound, from tender to robust, revealing SONYA KAHN as an artist who needs nothing to hide behind.

1/15/2010 - On the Rox (The Roxy) 9009 W Sunset Blvd, West Hollywood, California 90069 @9:00 PM
Update Required To play the media you will need to either update your browser to a recent version or update your Flash plugin.
Download Download

Contact Information
For booking and other inquiries please contact us via email: info@sonyakahn.com and/or fill out this FORM.